LocalGiving’s #GiveMe5 campaign is will again be going live on the newly announced Local Charities Day on the 16th of December.  Local Charities Day celebrates the acheivements of small, local charities and community groups, and puts the spotlight on the valuable work that they do.

For every £5 donation made to a participating charity through Localgiving between 00:00am and 23:59pm on the 16th of December, that charity will be placed into a draw to be doubled by an extra £5 of match funding.  Up to 1,000 £5 donations will be matched as part of this promotion. Donations of other amounts will not be included in the draw. The promotion only applies to one-time donations, however, donors may make as many £5 donations during the promotion as they wish, and there is no limit to the amount of match funding any single group may receive.

Find downloadable resources to help you promote your organisation during the campaign here. 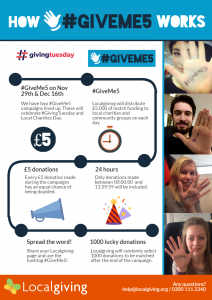 We share news here from our Members and Friend organisations too.
If your organisations is a Member or Friend then contact us (or email editor@vanel.org.uk) to let us know what you'd like to share.

Download our guidance on using VANEL for your promotion here or read it online here.